MORTAL KOMBAT 11 came out a few months ago, and I have been meaning to draw some characters from the game since I really love the costumes. SCORPION is pretty much the mascot of the fighting game series, so it’s only fitting we draw him first!

Hanzo Hasashi, better known as Scorpion (全蠍人, “Full Scorpion Man”), is a resurrected ninja in the Mortal Kombat fighting game series as well as the mascot of the game. He is one of the very few original characters debuting in the first Mortal Kombat arcade game. He holds the distinction, along with Raiden and Sub-Zero (in one form or another), of appearing in every generation of Mortal Kombat games as a playable character.

Use the video and step-by-step drawing instructions below to learn how to draw Scorpion from the Mortal Kombat video games. A new cartoon drawing tutorial is uploaded every week, so stay tooned!

Step 1: Start by drawing a circle near the top half of the page. The circle doesn’t have to be perfect. It’s just a guide for the top of Scorpion’s head. Leave enough room at the bottom for the lower part of his head. 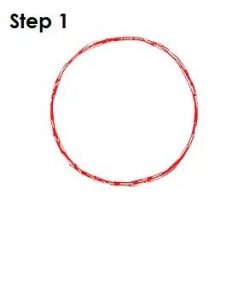 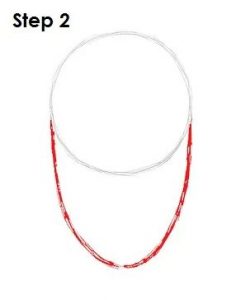 Step 3: Draw a vertical line that splits the head shape in half. This is a construction line that will help you place Scorpion’s facial features later on. 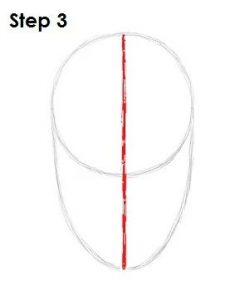 Step 4: Draw two small shapes as guides for Scorpion’s eyes. Draw them on either side of the vertical construction line and sitting right on top of the lower part of the original circle. The shape of Scorpion’s eyes should be similar to little footballs. 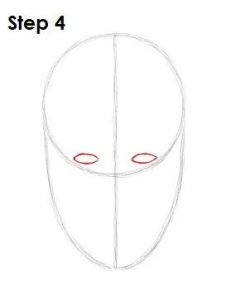 Step 5: That’s it for the initial sketch! You have the basic shape of Scorpion from the Mortal Kombat video games. Now go in and tighten your drawing. From this point on, press harder with your pencil in order to get darker lines and a more defined sketch. 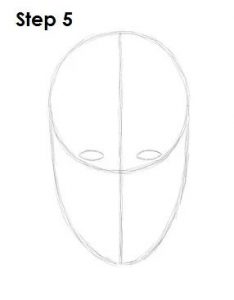 Step 6: Draw a thick, angled line shape on top of each eye for Scorpion’s furrowed eyebrows. The  eyebrows should come to a point on the sides. Use quick, short strokes to draw the bushy eyebrows. 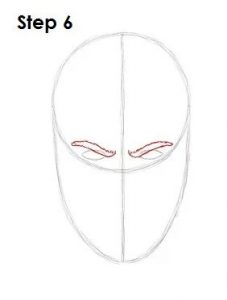 Step 7: Darken the football shapes and make them more angled to create Scorpion’s eyes. Don’t draw anything inside the eye, as this Mortal Kombat character doesn’t have any pupils. Draw a few lines around the eyes for the wrinkles. 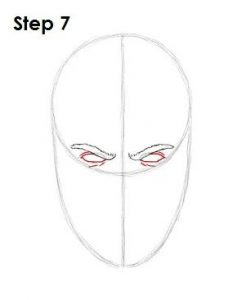 Step 8: The mask drawn here is one of the many variations that Scorpion has worn throughout the years. It’s a bit tricky, so it’s divided into five steps. First draw a shape similar to an octagon with the lower side missing. Place this shape right below the lower edge of the main circle. Draw a small rectangular shape above it, right between the eyes. 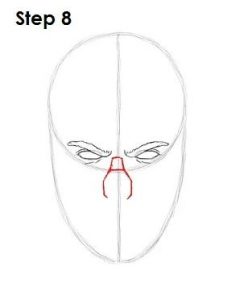 Step 9: Now draw the top section of Scorpion’s mask by using initial arc and the curvature of the initial circle as a guide. The top of the mask is basically a set of curved lines on top of each other and on either side of the face. Try to make the two sides the same for symmetry. 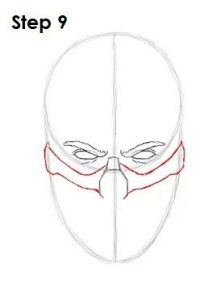 Step 10: Next draw a trapezoid-like shape in the middle under the first set of shapes. Then draw another set of lines on either side of Scorpion’s face. Notice that the lines have a thick portion on the outer ends. 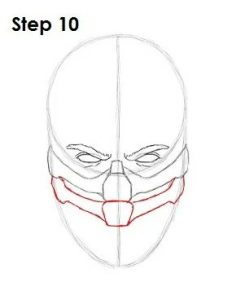 Step 11: Draw a rectangular shape in the middle, under the second set of shapes along with another set of lines on either side of Scorpion’s face. Pay attention to the small shapes that these lines are creating between one another. 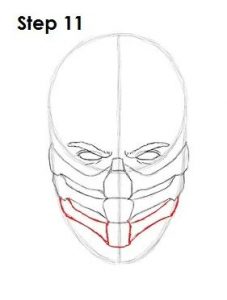 Step 12: Draw the last small shape in the middle with the sets of lines on the sides. Use the curvature of the initial arc shape as a guide to draw the bottom of Scorpion’s mask. 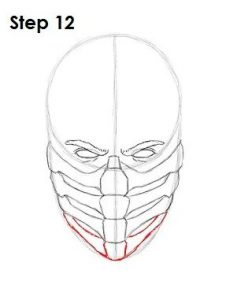 Step 13: Add the top part of Scorpion’s mask by drawing a spear-like shape on top, between the eyes. This shape is similar to the weapon that comes out of his hand. The top point of the spear should reach just above the middle of the initial circle. 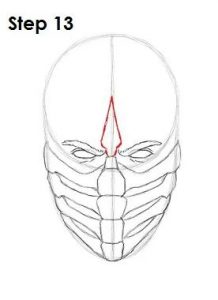 Step 14: Draw a pointy shape that extends toward the outside of Scorpion’s head, then curves up on either side of the spear-like shape. Then draw a line under each shape to surround the eyes. This creates the opening of the mask. 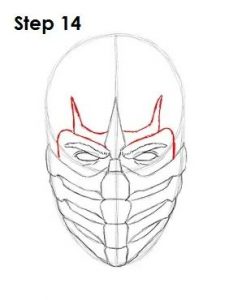 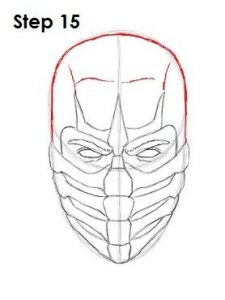 Step 16: That’s it! You now have a nice sketch of Scorpion from the Mortal Kombat video games. You can stop at this quick drawing for a rough, sketchy look or go for a more finished look by continuing to the step below. 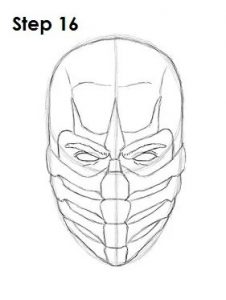 Step 17: For a more finished, inked look, carefully draw over the final sketch lines with a pen or marker. Wait for the ink to dry, and then get rid of every pencil mark with an eraser. You now have a finished inked drawing of Scorpion! You can stop here or go to the final step to complete your Scorpion drawing. 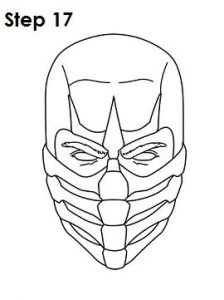 Final Step: For a completely finished Scorpion drawing, you have to color it. You can use markers, color pencils or even crayons! The hood and the spaces between the mask are black. The spear-like shape in the middle is gray, while the rest of the mask is yellow. Scorpion’s eyebrows are brown, and the skin is peach. If you don’t have peach, improvise and use light brown or yellow-orange. Experiment! That’s it! You now have a completed drawing of Scorpion from the Mortal Kombat video game series. 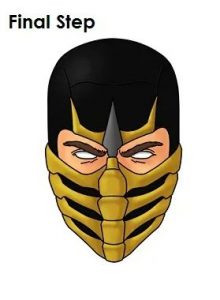